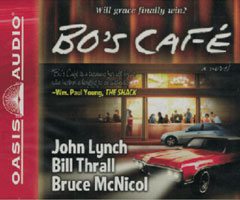 High-power tech executive, Steven Kerner, is living the American dream in Southern California. But he isn’t enjoying it. After another fight with his wife, he finds himself at a seedy bar far from home where an eccentric mystery man named Andy reveals a surprising understanding of Steven’s life.

Reluctantly, Steven begins driving around with Andy in his 1970 Chevy Electra convertible.  Through a series of frustrating and painful encounters, a genuine friendship develops between the two men. With the grace of a loving community, and the patience of a God who has been tenderly drawing him to it, Steven finally accepts the very thing he’s needed all along.

Bo’s Café is a journey for all who struggle with unresolved anger, trust issues, and a longing to step off the performance treadmill of life. The profound but simple steps Steven takes open him up to a more authentic way of living. Embracing honesty and confronting his fears helps to awaken his buried emotions. As he forsakes his self-absorbed focus, choosing to exchange safety for messy vulnerability, Stephen discovers a pathway to growing trust.  This fictionalized version of a true story of healing shows the power that a loving community has to reveal God’s unbridled grace.   God’s love is all around us, if we would just have the courage to let it in.

Great story.I could not put the book down.I wanted a healing for the family.I knew God was with them.I want to go to Bo’s cafe.

“Bo’s Cafe” is an excellent book, defining the process by which God works His grace in our lives through relationships and accountability. Don’t let the title fool you. This book is a “must read” for anyone trying to live and communicate the truths of the Christian life. Enjoy!

“Anger and Loneliness are epidemic in our culture — destroying relationships”

“Discover the joy of finding a loving community of Trust”

… For all who long to know the freedom of being ‘authentic’