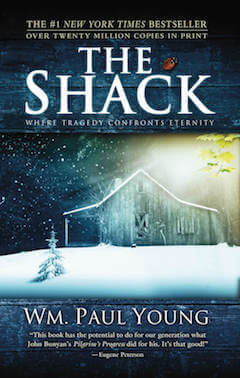 Available as an audio book

“When the imagination of a writer and the passion of a theologian cross-fertilize, the result is a novel on the order of THE SHACK. This book has the potential to do for our generation what John Bunyan’s Pilgrim’s Progress did for his. It’s that good”

“Wrapped increative brilliance, THE SHACK is spiritually profound, theologicallyenlightening, and life-impacting. It has my highest recommendation. Weare joyfully giving away copies by the case.”

“An exceptionalpiece of writing that ushers you directly into the heart and nature of God inthe midst of agonizing human suffering. This amazing story will challengeyou to consider the person and the plan of God in more expansive terms than youmay have ever dreamed.”

--David Gregory, author of Dinner with a Perfect Stranger

The Shack Interview with Paul Young

An Interview with Paul, Brad and Wayne

A Look Inside ‘The Shack’