He Came as One of Us

He Came As One of Us 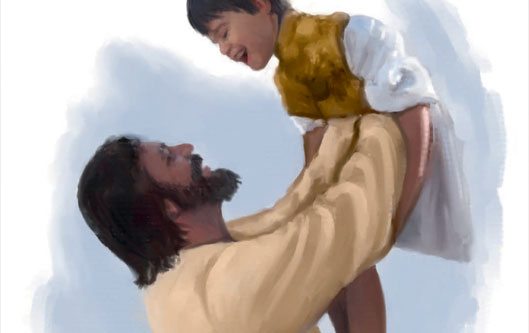 As unimaginable as it might be to us that the Creator would enter his creation as a dependent, vulnerable infant, what is even more astonishing is that he spent the next thirty years as a human, living among his people and no one had a clue who he was.

On a mission of redemption he was content to let the drama unfold quite naturally. For thirty years he did nothing anyone would regard as significant. He learned to walk. He learned to speak. He learned obedience and did his chores. He grew up. He was a child and became a young man. He loved. He laughed. He cried. He simply lived life as a human being, encountering all its foibles and frailties. Though God very God, never once did he act out of that nature. He came as one of us and lived fully human among us.

Since the Gospels mainly focus on Jesus in his thirties, we forget that ninety percent of his time here on earth he simply grew up as a carpenter’s son in relative obscurity. He spent the vast majority of his time on what was truly significant, something we often miss: the extraordinary gift of everyday life.

It says of the boy Jesus that “the child continued to grow and become strong, increasing in wisdom, and God’s grace was upon him.” (Luke 2:40) The picture the Scripture paints is not that Jesus knew he was God Almighty from infancy, enduring the delay of childhood and waiting for the day he could give up the ruse of pretending to be human. Rather, he was a genuine child awakening to his true identity, discovering just as we do, his God-given purpose and destiny, and choosing to embrace it.

Though angels had revealed Jesus’ identity and purpose to his parents at his conception, and Simeon and Anna had reaffirmed it in the Temple, we are not sure they fully understood. Mary treasured the words in her heart, but she was a normal person, hearing them for the first time and having to come to grips with their staggering implications.

Mary may have shared all of these words with Jesus, but we do not know that. How did the young Jesus come to understand that Joseph, the man raising him, was not really his father –his real father was the Father in heaven? What proof was there? How do you convince others? How do you convince yourself? Is all this even possible? Or perhaps worse, what do you do if it is true?

On the family’s return from the Passover Feast in Jerusalem, the twelve-year-old Jesus stayed behind. Mary and Joseph, unaware he was not in their caravan, traveled a full day’s journey. When they could not find him among their relatives, they frantically returned to Jerusalem to look for him. After three days, they found him in the Temple, sitting in the midst of the teachers, both listening to them and asking questions. All who heard him were amazed at his knowledge and his answers to their questions. When his parents asked him, “Son, why have you treated us this way? Your father and I have been anxiously looking for you.”

Jesus responded, “Why were you looking for me? Did you not know that I had to be in my Father’s house about my Father’s business?” (Luke 2:48-49) Something had shifted. Jesus was awakening to who he really was. I wonder how Joseph felt. Did those words sting? Did he realize what was happening? Jesus returned with them, all the while continuing to increase in wisdom, in stature, and in favor with God and with others.

We have precious little record of the rest of Jesus’ growing up. Jesus was the eldest son of a family with brothers and sisters. He learned the family trade as a carpenter and lived a simple, ordinary life. When did it dawn upon him, I am the Messiah—I am God, in human flesh? How did that not mess him up? Instead he chose a path of humility and meekness. He patiently waited for his appointed time.

As Jesus approached his thirty years of age, John the Baptist emerged, preaching a baptism of repentance, preparing people for the coming of the Messiah. All Israel went out to the Jordan to be baptized. As unfathomable as it is for us, the man Christ Jesus was sinless. Though he was tempted in every way we are, he never sinned.

Nevertheless, Jesus went out to be baptized by John. Knowing Jesus had lived a sinless life, John tried to prevent him, saying, “You should be baptizing me.” Jesus answered, “No, it is appropriate in this way for us to fulfill all righteousness.” So as to set the example, John baptized him and immediately after he came out of the water, the Holy Spirit settled on Jesus like a dove, and a voice spoke out of the Heavens: ‘This is my beloved Son, in whom I am well pleased.” (Matthew 3:13-17)

Before he ever preached a sermon, healed a disease, or performed a miracle, he had his Father’s resounding endorsement. What great feat had he accomplished? In one sense, gloriously nothing: He simply grew up into a young man. He lived a normal life. He lived as one of us. In another sense, perhaps everything: He lived as a loved son, becoming aware of who his True Father was. He had come to trust in that love, learned to hear and trust in His Voice, and chose to live in dependence upon the grace and power that the Holy Spirit supplied. He lived as God has always intended for us to live—in a dynamic relationship centered in the Father’s love, and thereby he lived a sinless life.

Jesus’ ministry did not start with his baptism; it began with his first inklings that he was more than just a man. What many consider insignificant, God might actually consider of greater importance: normal life—our magnificently mundane, everyday life.