Seeing What Others Cannot See

When Helping Can Hinder 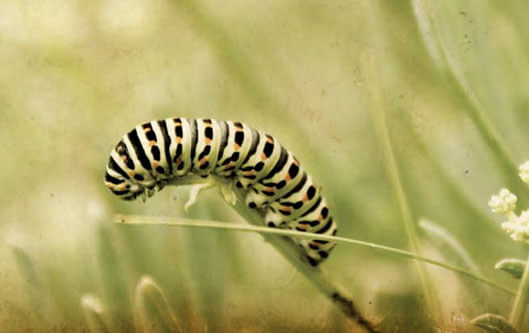 Part 1 Seeing What Others Cannot See
by Brad Cummings

Have you ever felt as though the Sun was unfairly picking on you, as if it had some personal vendetta? The sun on that day was a scorcher, and I was sitting under a nearby shade tree, looking for some relief from the heat, while waiting for my mother to bring her suitcase to the baggage truck. I had no idea that I was about to have one of the most memorable days of my life, one that would last a lifetime.

As I sat there, melting in the heat, I remember feeling something strange on my hand. Glancing down, all I saw was something wiggling and yellow, black, and white before I screamed, “Ahhh!” Instinctively, I whipped it off my hand, knocking whatever it was into the dead grass.

Curious I jumped up and saw it was just a caterpillar, though it was squirming a bit after such a hard landing. I felt kind of bad because it looked as though I might have hurt it. “Dumb thing,” I grumbled to myself, “I guess I’ll out you out of your misery.” But just as I lifted my foot to squash it, I heard someone call out, “Sammy, wait!” I turned to find Mr. Mendez, the owner of our circus, walking toward me. Known far and wide as “the Showman,” he was the man to whom my mother said we owed our lives. “Why? It’s just some old caterpillar,” I responded.

Mendez crouched down and carefully picked up the caterpillar. “How can you be so sure?” The caterpillar crept along his finger, then stopped, arched half its body upward and pawed at the air, as if reaching for something that wasn’t there. It didn’t look very smart. It just looked like a fat striped worm that couldn’t do much. Even a grasshopper seemed more interesting to me, since it could leap ten feet in a single bound.

“Well . . . just look at him,” I said, which Mendez seemed quite amused to hear and began to laugh.

“Sometimes the most wonderful things cannot be seen with our eyes, so they are missed altogether. There is much more in him than you know, young man. What do you say we give him a chance?” After nodding my head, Mr. Mendez stepped to the back of a truck and grabbed an empty glass jar. “Then find a twig and gather some leaves from that plant,” he said pointing toward where I had found him.

So I quickly picked a few fresh leaves and put them inside his new glass home. Mendez then gingerly placed the caterpillar on one of the leaves and handed me the jar.

“There. He’s yours now, my dear Sammy. So take good care of him.”

Even at the age of five-going-on-six, I loved listening to Mr. Mendez and seeing the world through his eyes. He seemed to look at life through the lens of what could be, whereas most of us couldn’t see past what was. There was something intangible about him that always made me feel as though I was in the presence of nobility, as if royalty lay hidden just beneath the surface.”

Excerpt taken from “The Butterfly Circus” – adapted by Brad Cummings and Lance Wubbels, Story by and © Josh & Rebekah Weigel. All rights reserved. Available on this website.